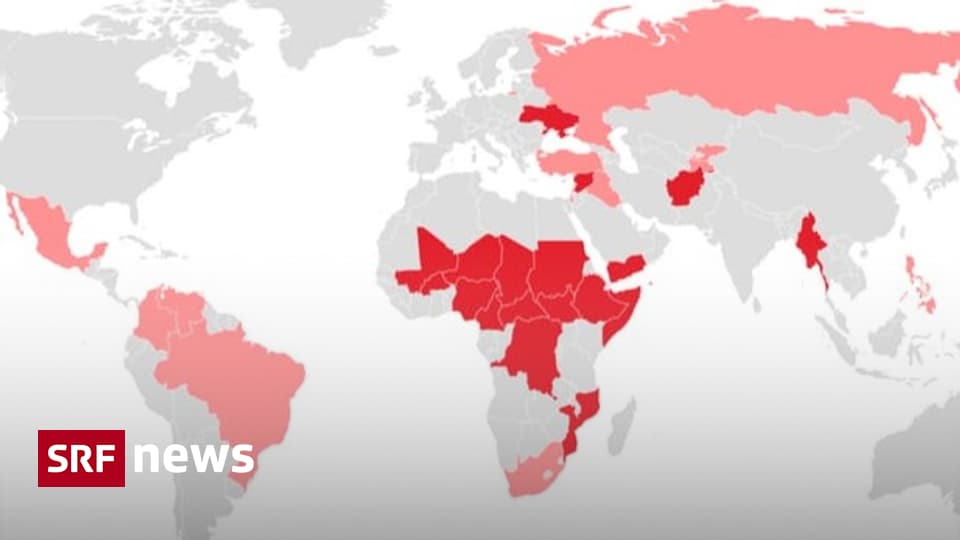 Ethiopia: There are three wars in Ethiopia in 2021. Since 2017, various ethnic groups have been at war over territorial dominance and land. As a result, 180,000 people were displaced. A second conflict over regional power relations between the Oromia Liberation Front and the government, which has been ongoing since 1992, turned into a war a few years ago. The third war between Tigray (another liberation front) and the Ethiopian and Eritrean governments and their supporters was about the political direction of Ethiopia. Information about dead or injured is not listed in HIIK 2021.

Burkina Faso: As “NZZ” reported last month, there is currently no more violence in the Sahel (the seven sub-Saharan African countries) than in Burkina Faso. In the first half of 2022, more than 2,000 people were killed in more than 900 attacks. Reason: At the heart of the Sahel conflict, various Islamist groups, including branches of al-Qaeda and especially IS (Islamic State), are fighting for international power. According to “NZZ”, the conflict in Burkina Faso displaced one-tenth of the population – that’s two million people.

Democratic Republic of Congo: The conflict barometer calculates parallels in the Democratic Republic of Congo to three wars that erupted in the late 1990s or early 2000s. Especially in the east of the country, local militia (partially Islamist) groups are fighting against the government, which is supported by Monusco (the UN peacekeeping force sent in 20 years ago). It is about local dominance and resources. The northeastern province of Iduri has seen repeated violent attacks since late December, killing at least 1,100 people in 2021, including at least 500 civilians.

Cameron: Cameroon has been affected by two conflicts: one over the secession of the Southern Cameroons region. The French-speaking government is battling various separatist groups from the English-speaking minority, which has already declared itself the Federal Republic of Amazonia. In 2021, violent conflicts claimed 600 lives. Also, fighting continues between the government forces of Cameroon, Nigeria, Niger and Chad and the radical Islamist Boko Haram militants. The group opposes Western education and democratic systems and strives to establish an Islamic caliphate. About 200 people died in this second conflict in 2021.

Mali: With 20 million people, Mali has experienced three military coups since 2012 and is considered politically highly unstable. Since a coup in 2021, the country has been led by a military interim government that maintains close ties to Russia. So the Russian mercenaries of the Wagner group were hired. In Mali, terrorist and rebel groups have been rebelling against the government for years. As part of the Minusa mission, the UN The country is trying to preserve peace, but the government’s unwillingness to reform and the lack of population make it difficult to stabilize the country. This was reported by the German Society for the United Nations. HIIK does not provide any information on dead, injured or displaced persons.

Mozambique: Since 2017, the country has been at war with the Mozambican government and al-Shabaab Islamist militants. According to “Deutsche Welle” and “Berner Zeitung”, the group is considered a regional branch of the Al-Qaeda terrorist network and fights violently to establish an Islamic theocracy. In 2021, the war claimed more than 700 lives. 70,000 people have been displaced in the country.

Niger: Boko Haram (see Cameroon) is in Niger. But al Qaeda affiliates and suspected IS members also fought the government and its backers last August. According to Crisis Watch, a state of emergency remains in effect in three southern regions of Niger. The defense minister also plans to increase the army force from 33,000 to 100,000 by 2030. HIIK does not provide information on dead, injured or displaced persons.

Nigeria: Nigerian authorities tightened security in the capital Abuja and commercial hub Lagos last month as jihadist, criminal and separatist violence continued in several regions, Crisis Watch reported. Government forces continue their operations against Boko Haram and the Islamic State. According to the Conflict Barometer, this war has been going on since 2003. As a result of the ongoing violence, around two million people have been displaced in northeastern Nigeria and neighboring states of Lake Chad.

Somalia: There has been an ongoing war between al-Shabaab (see Mozambique) and the Somali government for 18 years. “Al-Shabaab is the biggest threat to Somalia’s security,” James Swann, the UN envoy to Somalia, told a German newspaper in February. According to the Conflict Barometer, between 1,500 and 3,000 people will be killed in 2021.

South Africa: Destroyed shopping centers, more than 300 people died and a majority of the population is poorer than before: this is the result of the bloody riots that took place in mid-July 2021. Poverty, unemployment, Covid, corruption – here and there some groups protested. But it was the rallying cry of supporters of former president Jacob Zuma (ANC), who was jailed for corruption, that turned the simmering frustration into an uproar. The conflict between the ANC and opposition parties has been going on since 2015, escalating into a limited war last year.

Sudan: Three years ago, dictator Omar al-Bashir was ousted after months of popular uprising. Democracy seemed possible, and the country came out of isolation. But then the military put an end to the experiment in a coup d’état. The resistance movement continues to fight and pay a high price: people are killed every day in street demonstrations. Giving up is not an option – revolution has staying power. (SRF, 05/21/2022)

South Sudan: Since independence from Sudan in 2011, South Sudan has been at war between the local communities Dinka, Nuer and Murle. It is about territorial claims to power, livestock and land. The number of violent conflicts has decreased in 2021. However, at least 1,467 people were killed (compared to 1,847 the previous year) and more than 40,000 were displaced.

Chad: A number of radical Islamic terrorist groups, including Boko Haram, operate in the central-western region near Lake Chad, which borders Nigeria and Cameroon. Since 2003 there have been repeated bloody clashes between them and the Chadian army, with the majority of the government managing to keep Islamic terrorism out of the country. The government has also been battling rebel groups since the long-time Chadian president was killed last year. After months of negotiations, the ruling military junta and 42 of a total of 47 rebel groups signed a peace deal in early August. However, there was no signature from the rebel group, which the AP news agency described as “very important”. The 2021 conflict barometer does not show how many people died, were injured and displaced as a result of the conflict.

Central African Republic: Since 2012: A limited battle for national power and resources between militant groups and the government, on the one hand the UN mission of Mission MINUSCA. Backed by peacekeeping troops, Russian Wagner mercenaries on one side and Rwanda on the other, one side escalated. War of 2021. At least 400 people were killed and 411,000 displaced during the year.