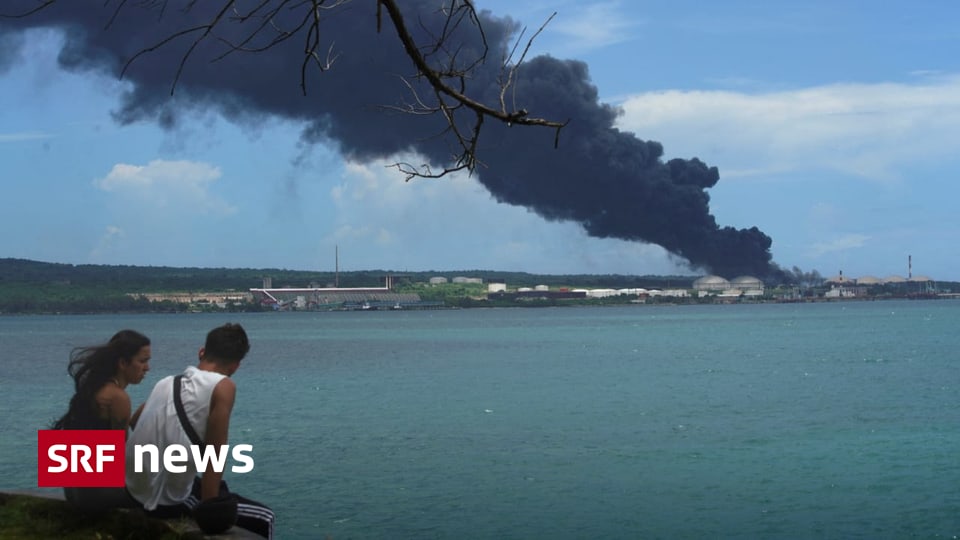 In Cuba, black rain has been falling from the sky for days after a lightning strike set a fuel depot on fire. After all, the crash exacerbated the island’s energy crisis.

Oscar Alba, a journalist in Cuba, says there is a great sense of hopelessness among the people after already making great sacrifices as a result of the epidemic.

Oscar Alba is a loose nickname for a Western journalist working in Cuba who does not want to be recognized for fear of government repression. SRF News respects this wish without jeopardizing independence and freedom of reporting.

SRF News: What are the effects of the massive fires in northern Cuba on the Caribbean islands’ energy production?

Oscar Alba: The country’s largest power plant has been forced to shut down next to a fuel depot that caught fire near Madanzas in northern Cuba. Two of the country’s eight power plants are not working, while the other six are operating at an average of half.

This has massive consequences for power supply: the country’s provinces have experienced repeated blackouts for months, which have now intensified again. The capital, Havana, is also currently affected.

What does the lack of electricity even now mean for the daily lives of Cubans?

This is a disaster, especially during the current tropical summer heat, when the heat is almost unbearable. People in rural areas are without electricity for up to 18 hours a day. The fan no longer runs, and the small amount of food in the refrigerator may spoil if it is old and poorly insulated.

In rural areas, people have no electricity for up to 18 hours a day – no fan, which means food in the fridge spoils.

Shops, factories and offices are closed during blackouts – life comes to a complete standstill. People lay like dead flies—in the shade under trees or at the entrance of houses on stone floors with doors open. Various protests have already taken place in rural areas, in the dark of night due to lack of electricity. It is quite obvious how the people in Havana will react now.

See also  Flooding due to heavy monsoon rains in Pakistan

Most hospitals have emergency generators, but the situation is deserted. For example, images of a nurse fanning a fire victim in a run-down hospital with a cardboard box can be seen on state television. This explains the deficiencies in the Cuban healthcare system. Hard to bear.

The massive fire was finally brought under control

Yesterday, Thursday, the Cuban Fire Department announced that the massive fire in Matanzas was finally under control. It is now impossible for it to spread further or for new outbreaks to occur. However, smoke can still be expected. After the fire, 14 people are still missing in the fuel storage area. 130 people are receiving treatment in the hospital due to the fire accident. 23 patients were still at the clinic on Thursday, six of them critically injured. 2 firemen died while fighting the fire.

On 5 August, during a thunderstorm, lightning caused a fuel tank at Matanzas to explode. The fire quickly spread to other areas. A total of four of the eight tanks were destroyed. Experts from Mexico and Venezuela flew in to help put out the fire. (sda)

What can people expect in the coming months?

People see no light on the horizon. The doom-and-gloom mood that has prevailed for months due to the pandemic has been exacerbated by massive fires and power outages. Nothing works anymore, and accidents happen more often: a recent hotel fire killed 47, and three girls died after falling from a balcony.

Get out of Cuba if you can. Those who have to stay try to live from day to day.

People perceive such incidents as signs of decay, which greatly affects their spirits. Those who can leave the island and those who must stay try to live from day to day. Cuba has slipped into a deep crisis that has gone largely unnoticed by the world public—and things seem to be getting worse forever than they already are.