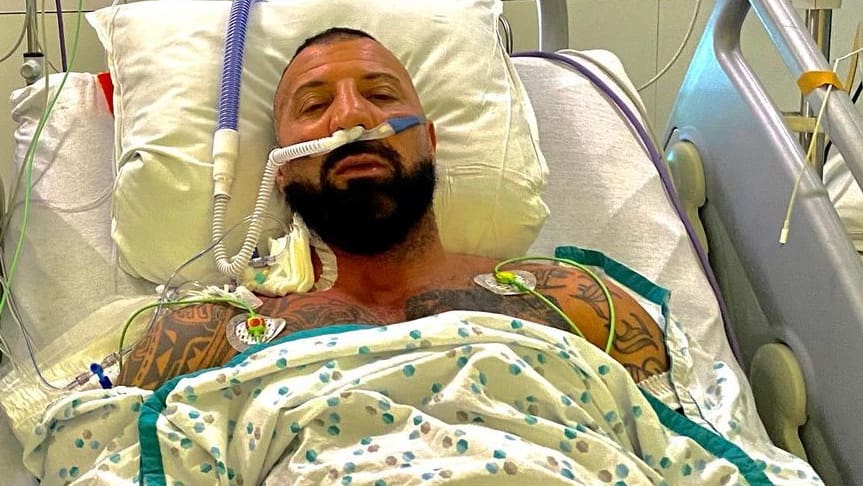 He was considered “the strongest man in Belgium”. Now he was defeated by an enemy, whom he always denied – yes, for him it was not even: Corona. Kickboxing star and staunch anti-vaccine activist Frederick Sinistra († 41) has died of the Corona virus.

A three-time kickpower world champion nicknamed “Fred the Undertaker”, he died in mid – December. On Christmas Day, the Belgian media reported that severe suffocation was the cause of death. Sinistra suffocated from the effects of her corona infection. Sinistra did not confirm it. He showed fans how he was connected to the pipes and cables in the hospital. Due to lung problems.

Sinistra told fans on November 27 that the fight should be canceled. “Complete series of diseases” struck his lungs. The CRP plasma protein swelling value is thirty times higher than the maximum normal value. “A warrior never gives up!” Sinistra vowed. “I’ll come back even stronger.”

On December 7, Sinistra congratulated her son Diego on Instagram, and on December 13 he was looking for a new home for the puppy through an Instagram ad. On December 14 he called for a fight again. He always had to work twice as hard as everyone else. This should be his last Instagram post. Looking back, it reads like a death notice. On December 17, he was confirmed dead on Sinistra’s Instagram page – probably written by his wife. Monasticism took place just before Christmas. Fans paid their last respects to him in the guise of Sinistra.

According to Belgian media reports, the kickboxing star is a bold vaccine opponent and corona denier. He always talked about the “little virus” and reportedly refused to pronounce the words “govit” and “corona”, according to the “De Morgan” newspaper. He was only admitted to the hospital because his trainer persuaded him to first encounter Osman Yeek’s respiratory problems.

Despite his ill health, Sinistra allowed himself to be discharged from Liege Hospital. He wanted to keep an oxygen bottle at home. A few days later, on December 16, he died of Govt-19. Strong, relatively young, he would never have thought that lung disease would harm him. He always said that fitness and his age would protect him.

“My husband did not die of goiter”

On Boxing Day on Instagram, Sinistra’s widow said in large letters, “My husband Kovit is not dead.” He blames the propaganda and slander of the “corrupt press” and “some family members”: “I will fight to the end to recover the truth and his name from these scandals surrounding the family and their deaths. Washed clean.”

Fought until the last breath. Fred “would never have accepted that what happened to him could be used to spread fear and promote the vaccine.” In the end, the widow writes that the truth will prevail.

Sinistra will explain everything in a film about his life to be released in 2022. (Case)