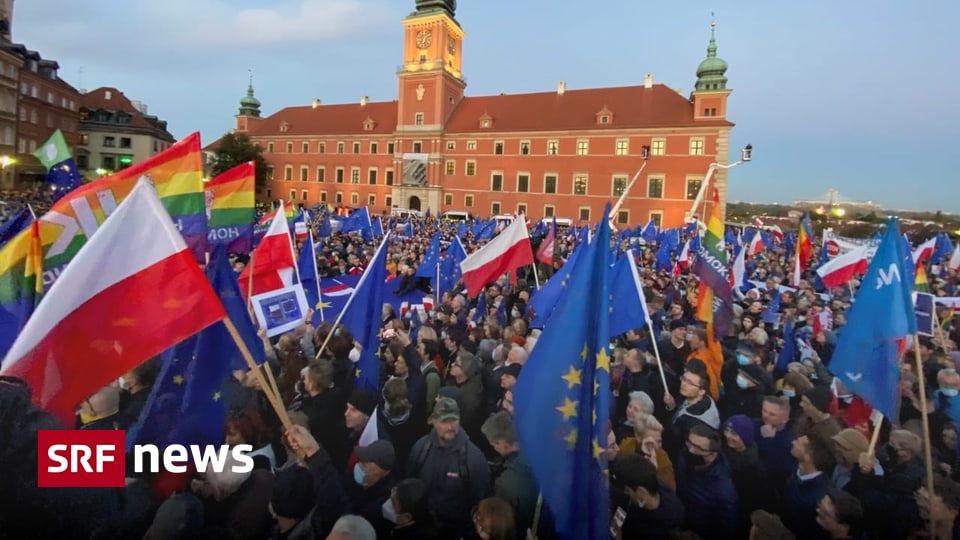 In the capital, Warsaw, protesters gathered in Palace Square. They waved Polish and European flags and shouted “We are staying” and “We are Europe”. The Polish media is talking about 100,000 protesters in Warsaw alone.

The Polish court recently ruled that certain elements of EU law violate the Polish constitution. It gave priority to national law over EU law. This decision provokes conflict between the EU Commission and Warsaw over the reform of the Polish judiciary.

Ivory: “Poland’s place is in Europe”

Former EU Council President and Polish opposition leader Donald Tusk has called for protests. When he appeared before protesters in Warsaw, he said the national conservative ruling party PIS was no longer talking about wanting the country out of the EU. “Poland’s place is in Europe,” Dusk said. “We will win because we have more!” Dusk and other speakers were repeatedly interrupted by loud interruptions and slogans from the counter-protest of right-wing national groups.

In Gdansk, Lek Velesa, a Nobel Peace Prize laureate and former Polish president, spoke to protesters. “The people who run the state today are a great misfortune to Poland,” said the former head of the Solidarnovsk Union. No enemy who has ruled Poland has divided the people of the country like the PiS.

State television broadcaster DVB, which, in the opinion of critics, often presents the government’s view on one side, showed a tick under the headline “Opposition to the Polish constitution” during a report on Sunday’s events.

The PIS government has been restructuring the judiciary for years. Critics accuse him of pressuring judges. As a result of the reforms, the EU Commission has already initiated a number of violations against Warsaw and has filed complaints with the European Court of Justice.

See also  According to the CIA, Putin fears defeat