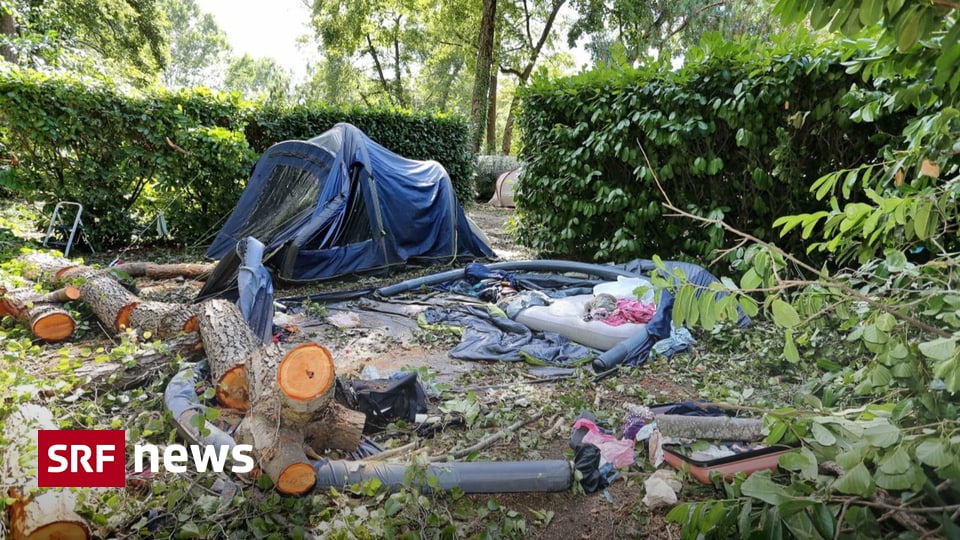 On Thursday, several trees fell into a small bathing lake in Carinthia, Austria, police and the Austrian Red Cross said. Two girls, aged four and eight, died and eleven others were injured, some seriously.

“It caught us all completely off guard,” an eyewitness told “Klein Zeitung.” Bathers were swept away by the cyclone. Police say three women have died after falling into a tree while hiking in the gaming district of Lower Austria.

According to the state weather service ZAMG, the storm’s speed reached 139 km/h on Thursday. In some parts of Austria, downed power poles affected rail traffic.

Even after the storm, some train connections in the south of the country remain disrupted. The federal states of Carinthia and Styria were also affected on Friday. Among other things, the Austrian Federal Railways announced that trains from Vienna to Venice would have to be diverted via Salzburg. Regional links were also disrupted.

Dozens of trees fell on the Southern Autobahn (A2) in Carinthia due to strong winds. There was also a power outage in the tunnels. A vital transport link to Italy was closed in several places for cleaning and repair work. The highway was reopened to traffic on Friday.

In Styria, high-voltage lines and 2,000 substations were damaged, leaving tens of thousands of homes without power. “In many cases, our colleagues have to cut the road to repair work with a chainsaw,” a spokesperson for Energy Steermark told broadcaster ORF. It could take days if not weeks to repair all the damage.

The German Weather Service (DWD) is warning of the effects of heavy rain in the south of Bavaria and parts of Baden-Württemberg. On the edge of the Alps, a severe weather warning is in place for very heavy rain of up to 140 liters per square meter until Saturday morning. According to the DWD, 50 to 80 liters per square meter is possible in the rest of Bavaria and in the extreme southwest of Baden-Württemberg.

The storm caused damage and flooding in many parts of France and Italy. During a visit by French Interior Minister Gerald Dorman on Thursday evening Corsica 6 people died in the storm in the island. 20 people have been injured, this is the initial toll.

French President Emmanuel Macron pledged support for the island and its residents. A crisis team was formed at Macron’s vacation spot on the Cote d’Azur in the evening, with the participation of Prime Minister Elisabeth Borne.

Winds of more than 200 kilometers per hour hit Corsica. 45,000 households temporarily without power. As in other parts of France Marseille Storms and streets flooded.

A storm rages across Italy

In Tuscany Several media reported that a man and a woman were killed by falling trees near Lucca and in the coastal town of Carrara. A severe weather warning was in place for large parts of South Tyrol and central Italy in the north of the country. Strong gusts of more than 100 kilometers per hour and heavy rain hit a campsite in Tuscany’s Marina di Massa, where some were injured when trees fell.

The head of the Tuscany region, Eugenio Gianni, shared a video on Twitter of the Ferris wheel from the coastal town of Piombino.

On the northern coast of Liguria and Tuscany, the fire brigade counted more than 150 operations by midday.

And through the northern Italian lake town Venice A violent storm swept through the streets, overturning umbrellas and tables. Fragments of the wall broke through the church tower at the famous St. Mark’s Basilica in the center, according to Anza. Civil defense convened a crisis team in the afternoon due to storms in central and northern Italy.

A severe weather warning is still in effect in Italy

Italians must constantly prepare for severe weather. “Unfortunately, it is not over yet,” Italian Civil Defense Luigi D’Angelo told “La Stampa” newspaper on Friday.

Northeast and central areas were affected by storms. Physicist and climatologist Antonio Navarra explained that cold air from northern Europe meeting warm air in the Mediterranean region is responsible for the high cloudbursts.

Italy now appears to be divided in two: While storms and heavy rains have affected parts of the north and center, numerous forest and bushfires continue to burn in the south and on the islands.

On Friday night, firefighters around Palermo battled several wildfires. Wind and dry soil from drought fuel the flames. Many fires are caused by arson or human negligence.