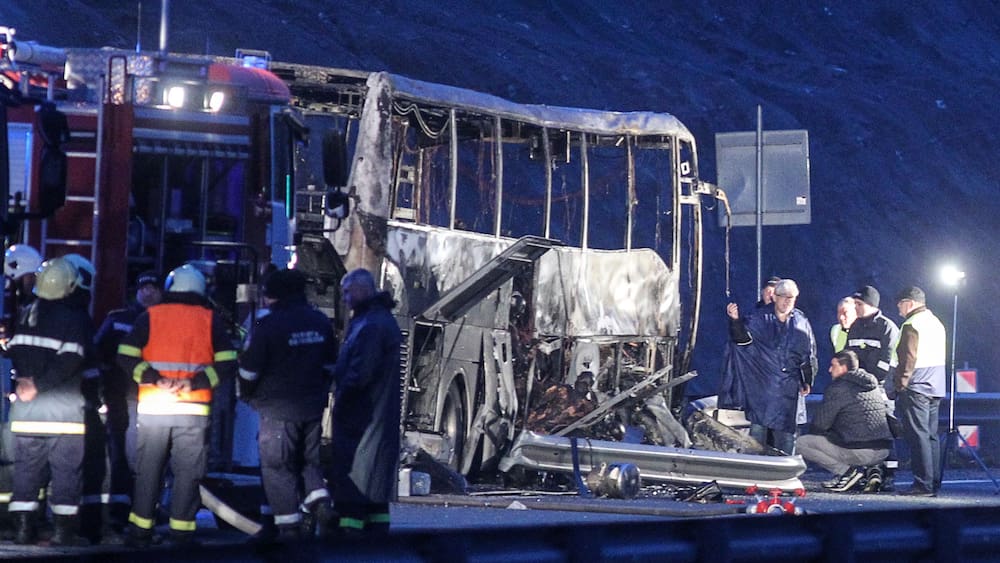 Dozens of people were killed in a horrific bus crash in Bulgaria on Tuesday night. The official news agency BTA quoted the Interior Ministry as saying that at least 46 people had been killed, including several children.

Some of the injured were taken to a hospital in Sofia and none of them were in danger. A total of 50 passengers and two drivers were on board the bus, state radio police said.

The bus was completely burned and wrecked

The accident happened on the Stroma Highway, 40 kilometers south of the capital Sofia. According to the BTA, the bus collided with a guard just after 2:00 am (1:00 am CET) for unexplained reasons and then overturned.

According to preliminary findings, the number of survivors of the bus fire is very low. It was not immediately clear if he caught fire before the crash or if he rolled and then caught fire. The Attorney General’s Office has launched an investigation into the cause of the crash.

Bus on the way to northern Macedonia

According to Bulgarian Deputy Attorney General Borislav Sarafo, the passengers are citizens of northern Macedonia. Among the victims was a Belgian citizen, said Vladimir Krostovsky, a Bulgarian state radio station interim head of the northern Macedonian embassy in Sofia.

According to the Interior Ministry in Sofia, the bus was registered in Skopje, coming from Turkey to Bulgaria and heading towards northern Macedonia. The mayor of the neighboring community said on state radio that part of the road where the accident took place is in a hilly area and is often named for accidents.

Bulgaria’s caretaker Prime Minister Stefan Janew immediately went to the scene of the accident and expressed his deep concern. Expressing his condolences to the relatives of the victims, Janive said, “This is a great tragedy.

Interior Minister Poyko Racho was also shocked and described a dark scene at the scene: “I have never seen anything so horrible, it’s hard to bear. The cremated bodies are piled up. Many of the dead have not yet been identified.” (Euc / zis / SDA)