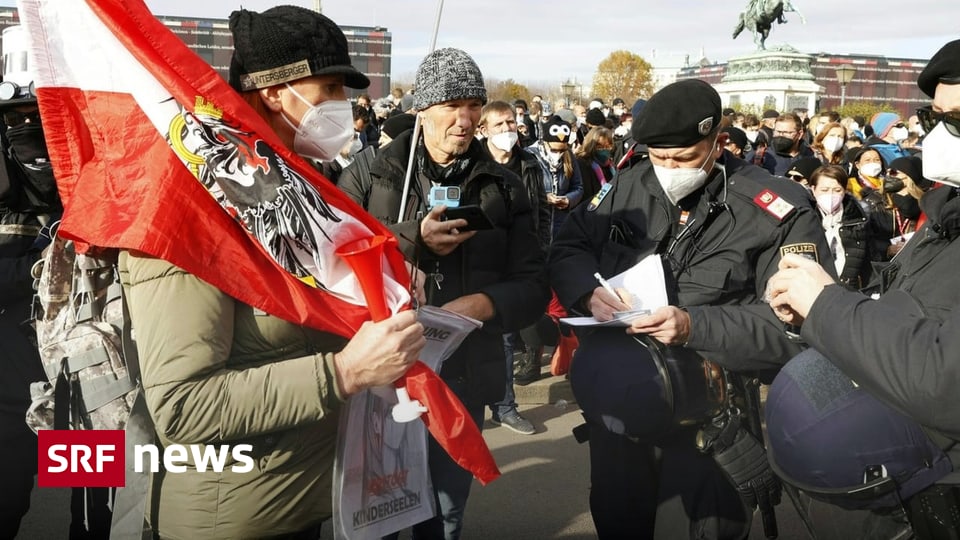 After 12 noon, a large protest march began in Vienna and paralyzed large areas of traffic. Participants waved Austrian flags and repeatedly chanted “Freedom”. Many of them did not wear FFP2 masks, thus exceeding the requirements. Loudspeaker announcements indicating the need for a mask were acknowledged with a whistle.

At the beginning of the protest, police said no significant incidents had taken place. However, Austrian media reports indicate that there were violent clashes between officials and protesters in the afternoon. During the identification test, police officers were beaten and kicked by bystanders. Also, some participants threw bottles at the police when they saw the media.

“The mood is hot,” a police spokesman later told a German newspaper. 1,300 emergency services have been suspended around the protests. Many have already been arrested. Well-known neo-Nazis and other right-wing extremists joined the protesters, according to the Austrian news agency APA.

The right-wing FPÖ, among others, called for protests. Their boss, Herbert Kiggle, a victim of corona, spoke to the video message. In it he called for the widest possible opposition. He was already a vocal critic of the government’s strategy and spoke of a “dictatorship” in Austria.

The Austrian government announced a lockout for everyone from Monday due to the massive fourth corona wave. While the exit restrictions for vaccinated and cured are expected to end on December 13th, the lockout for non-vaccinated is unlimited. In addition, Austria will be the first country to introduce the mandatory corona vaccine in the EU in February 2022.

The federal leader has warned of rifts in the community

Austrian Federal President Alexander van der Pellen has warned that there will be divisions in the community in the face of controversy over the new lockout. “We do not separate ourselves,” Van der Pellen said in a televised speech Friday evening. Reactions should not be dominated by anger, pain and rage, but with the insight that only exit controls can break the largest fourth corona wave. The head of state openly supported the compulsory vaccination announced by the government. Citizens have rights, but also obligations. This includes the duty to protect the community, said van der Bellan.

The vaccination rate in Austria is now 66 percent. The preference for safety injections has increased significantly in the last few weeks. The number of vaccines has quadrupled compared to the summer. The reasons for this are the 3G rule and the 2G rule in the workplace, which exclude those who are not vaccinated from large areas of public life.