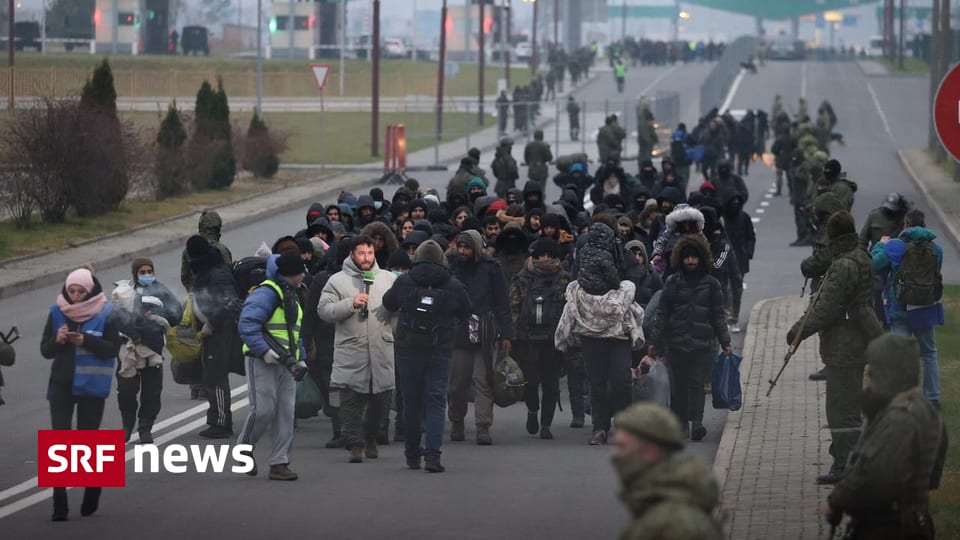 “At the moment, foreigners are returning from the Kuznica-Brusky border to the site of the former tent camp, which is a few hundred meters from the border,” the Polish border guard said on Twitter on Tuesday. A video has been released showing people on the edge of the forest behind the border forts, warming themselves around the fire.

On Tuesday morning, there was still chaos on the border between Belarus and Poland. According to Polish officials, the refugees hurled stones at soldiers and security forces. They were fitted with pop grenades from the Belarusian side.

Poland retaliated with water cannons. Belarusian state media showed videos of the victims, including journalists, who were hit by a water jet. The Polish Ministry of Defense also released a video showing the use of water cannon.

According to Polish sources, the clashes ended two hours later. The information could not be verified freely as the Polish media was not allowed to publish news from the border area. According to official figures, the country has now deployed more than 20,000 security forces along the border.

Conflict on the outer border of the EU at three points

According to Belarusian ruler Alexander Lukashenko, more than 2,000 people have been in a “refugee camp” for several days. Meanwhile, Lukashenko ordered the establishment of a night camp for some immigrants near the Polish border. In the Crotno region, a logistics center is being converted so that women and children can stay overnight, the Belda state agency said Tuesday evening. Attached photos show how people spread mats and blankets in a hall.

Phone calls with Putin and Merkel

Russian President Vladimir Putin on Tuesday recalled Belarusian ruler Alexander Lukashenko. The Kremlin announced on Tuesday the situation in the border area in Moscow. In addition, the Belarusian government agency Belda reported that the two leaders discussed how to protect the borders of the Commonwealth.

Lukashenko told Putin the day before his phone call with President Angela Merkel. This is Merkel’s first conversation with the regime since the controversial presidential election in Belarus last August.

Many of the immigrants are from Iraq. According to the agency Interfax, the country’s embassy in Moscow said about 200 people from Belarus wanted to return to their homeland. This includes families, women and children.

An “outbound flight” from Minsk is scheduled for this Thursday. “Around 200 people, including women and children currently in Belarus, have contacted Iraqi embassy officials in Moscow and asked them to return,” said a spokesman for the Iraqi embassy in Moscow.