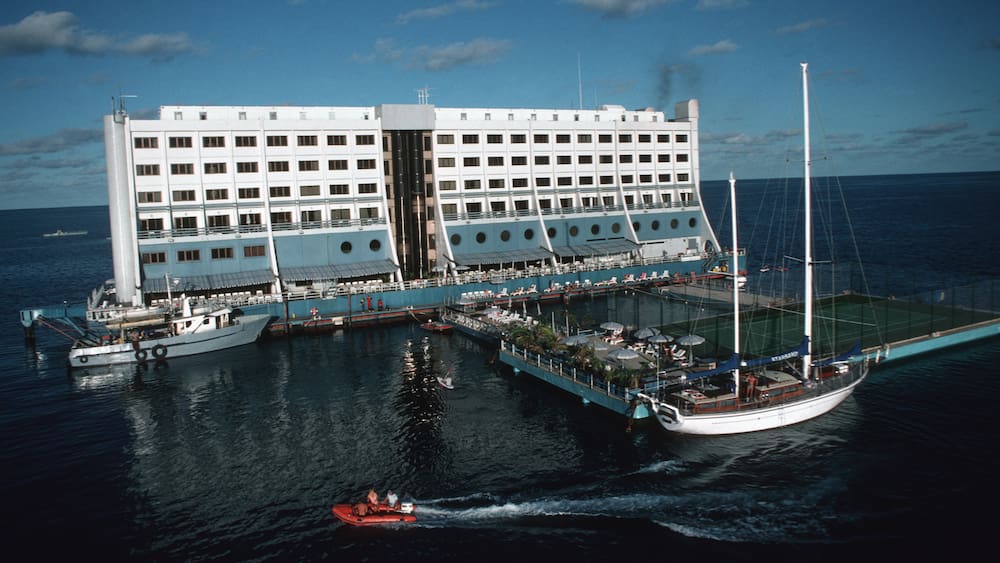 A view of the Four Seasons Great Barrier Reef Floating Resort: Opened in 1988, it is the world’s first floating hotel. The hotel was located 70 kilometers from Townsville, a city on the east coast of Australia. Hotel Promise: Stay on top of the Great Barrier Reef, the world’s largest coral reef. Connected with endless luxury. The hotel had a tennis court, a landing pad for helicopters and its own nightclub.

Today, after a good 30 years, the former luxury resort floats off the coast of North Korea – and is increasingly rotting. What happened?

Problems from the beginning

A floating hotel is being built in Singapore. Problems start in construction: There are delays, the hotel is being shipped to Australia six months late. A hurricane struck there, causing severe damage.

Then in 1988 the opening finally came. The hotel will truly become a glamorous one for a short period of time. But new problems soon arise: tourists are drowning in the sea on their way to the hotel. Or bad weather completely prevents guests from coming.

From Australia to Vietnam

A year later, investors have to sell the hotel. They wasted $ 40 million. The floating tourist temple is towed from the east coast of Australia to Vietnam. Since then, it has been anchored in the Saigon River in the capital, Ho Chi Minh City.

The 200-room hotel on seven floors aims to stimulate Vietnam tourism, which is still in its infancy ten years after the end of the Vietnam War. This hotel has been a popular meeting place for foreigners for many years. For Vietnamese, on the other hand, it is unaffordable and room prices of up to US $ 600 are higher than the annual wage.

In 1996, the gold rush for the floating hotel was completed in Vietnam: the temple on the river loses its appeal as there are countless hotels in the city. The hotel was closed, sold and finally moved to Singapore in 1997.

Next stop: North Korea. In the late 1990s, North and South Korea merged. Looks like North Korean tourism is booming. The floating hotel called Hotel Hakumkong will reopen in southeastern North Korea. This is a joint project of the two countries. At first everything seems to be going well. In fact, countless South Korean tourists are coming.

Then in 2008 a sudden result: a South Korean tourist was shot dead in the area by a North Korean soldier. She accidentally entered the military exemption zone during the march. Tourism is dry. The floating hotel will close in 2010. Has been vacant since.

The online magazine writes that North Korean ruler Kim Jong-un (37) has ordered the removal of the former dream hotel.Travel book. The hotel was architecturally outdated in the 80s. Being vacant for many years bothered him.

But despite the deep sleep, progressive demolition and demolition projects from above: so far, the hotel still stands. It is likely to be eventually updated and reopened. Maybe in North Korea, maybe in a completely different place in the world. It is already 14,000 kilometers under its belt, and many more can be added. (sfa)