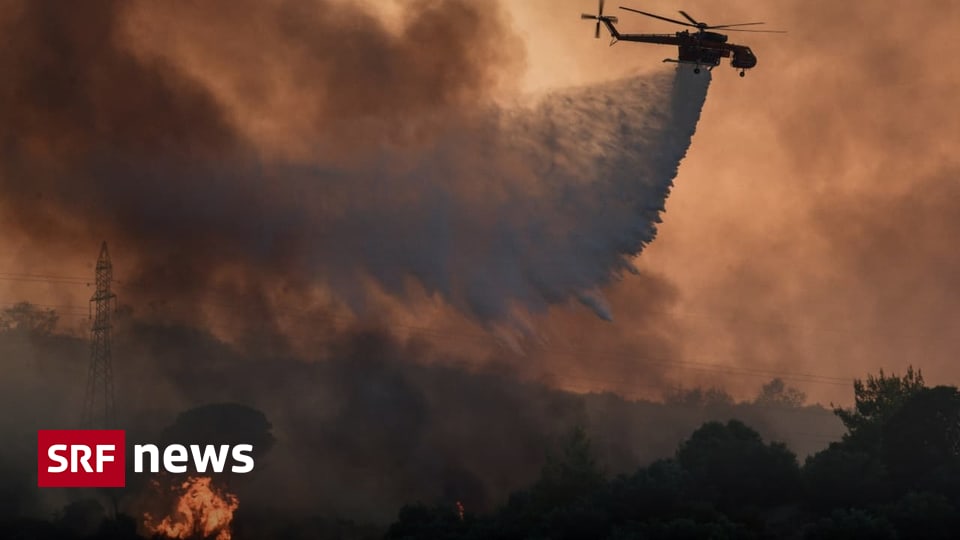 Heat has a firm grip on Europe. Many countries have been hit by massive fires. While the situation is slowly easing in Tenerife, the flames continue to burn out of control in northeastern Greece.

Spain: The situation has eased – the island of Tenerife has been hit hard. Spanish newspaper “El Dia” reported the island’s President Pedro Martin as saying on Monday that the fire is weakening and there is hope that it will be brought under control soon. Several wildfires in Spain in recent weeks have meanwhile been extinguished or largely brought under control.

Italy: Firefighters responded to wildfires more often this summer than a year ago. From July 15 to 21, more than 32,900 operations were counted, 4,000 more than the previous year, the fire brigade said. Forest fires have been burning for days in the border region of the Friuli-Venezia Giulia region. A large fire also broke out in Massarossa in Tuscany, where hundreds of people were brought to safety.

A fire broke out in Slovenia

Thousands of emergency services battled a week-long fire in Slovenia’s karst region. As of Monday, only 240 firefighters were in the area to monitor the situation, the STA news agency reported. According to this information, the flames destroyed almost 4000 hectares of vegetation. There was no initial information about damage to buildings in the affected villages.

President Borut Bahor thanked the governments of those countries for sending firefighting planes and helicopters to Slovenia to put out the fire. According to STA, these are Croatia, Austria, Italy, Slovakia, Hungary, Romania and Serbia.

Air suppression also played an important role as there were still many mines and mines during the First World War in inaccessible karst areas.

Greece: A massive fire in the Tadiya National Park in the country’s northeast has been burning out of control for the fifth consecutive day. Thadia village has been evacuated, 320 firemen along with 68 fire engines, six firefighting planes and two helicopters have been deployed. The military is also on site to provide support.

The fire has reportedly destroyed more than 2,500 hectares of forest and land so far. This is the result of calculations and maps by forest and forest fire experts, Greek news agency ANA reported.

A large fire south of the holiday island of Lesbos was also not contained. The wind there was very strong, fueling the source of the fire again and again. Two villagers were asked to leave the villages. The forest fire has already destroyed around 1700 hectares of forest and land in the region.

The smoke was thick enough to see from space. Copernicus, the European Earth Observatory, announced this on Twitter.

A large forest fire that broke out on Sunday in the west of the Peloponnese peninsula continued on Monday. The fire broke out on the Salkidiki peninsula, southeast of the port city of Thessaloniki, which is popular with holidaymakers. And near the Cretan capital of Rethymno, another fire broke out during the day.

There is no end to the Greece fire. Meteorologists have said that the drought will continue. Temperatures are expected to soar up to 40 degrees inland. Strong winds are also blowing in some areas.

France: The section on fires on the Atlantic coast is clear throughout. The Landiras forest fire is completely under control, the province responsible for Gironde announced on Monday. Emergency services brought a second major forest fire under control in the area near La Test-de-Buch.

Czech Republic: The forest fire in Switzerland’s Bohemian Park continues to be extinguished. A spokesman for the emergency services said around 30 fire brigade units along with 50 vehicles and a police and military helicopter were on the ground on Monday to put out the blaze.

A number of wildfires broke out in London, including Hayes and Thamesmead. Around 100 firefighters are on the job near Epping Forest in northeast London, according to broadcaster Sky News.